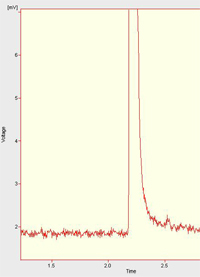 Lower detection and quantitation limits can be achieved by:

Prior you use the most inert GC instruments and parts, you should optimize the whole system first. A system with lower background will have a better performance. The main bleed/noise generators are:

Note: Leaks, oxydation and moisture will catalyze the processes.

Before the sample enters the GC system

Very often, the sample gets polluted before it is introduced into the GC system. You can avoid it by analyzing the sample as fresh as possible, and avod contact of the solvent with vial cap (careful shaking, etc...). If the septum of vial is penetretad once by the syringe needle, the solvent vapours get contact to the septum material. Softeners in the rubber/silicon are transported in the liquid sample by the solvent vapours. This effect is accelerated with every septum penetration by syringe needle. The effect can be observed already after three injections from one vial. 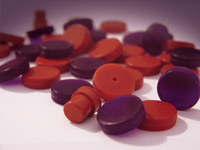 The septa are made of pure polydimethyl siloxane. The amount of PDMS in a septum is 60 times the amount present in the column. Septum is kept at higher temperatures continuously, which causes bleeding. Septum bleed products are cyclic and in D3-D10 range, which appears as ghoast peaks. Septum flush is recommended to minimize this influence. When you choose the proper GC septa, you should be careful on:

Note: In most cases the operating temperature and septum stability does not depend on its colour.