Incorporating columns, unions, tubing, splitters and filters, every component of ProteCol has been designedspecifically for Capillary LC. ProteCol can provide you with a complete Capillary LC solution, or individual components of ProteCol can be incorporated into your existing system. 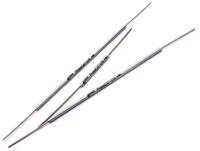 The core of any separation system is the column. ProteCol columns are designed specifically for Nano and Capillary LC. The column body is integrated with the connection tubing, both of which are made from inert fused silica lined PEEK™ tubing, giving a robust and flexible column.

The most commonly used packing material is C18 modified silica, 3μm particles, which offers a high resolution while allowing the use of shorter columns. Typical pore sizes are 120Å for small molecules (pharmaceutical drugs and small peptides) and 300Å for larger molecules (large peptides and small proteins). Ideal for applications in Proteomics and Drug Discovery.